Dan Booth and Nostalgic Motor Cars will be retiring 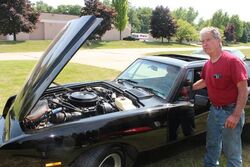 Dan Booth and Nostalgic Motor Cars will be retiring in the future.  We have probably been and still are, the longest and best kept secret in the Avanti world. We are the oldest, and largest Avanti dealership in the world.  It’s been over 45 years of continuous and exclusively dedicated to Avanti sales (new and used Avantis) parts and complete service.  In those 45 Years I have amassed the world’s largest inventory of N.O.S. Avanti parts for 1963-1985.  I have at least 100 times more N.O.S. Avanti parts, than all the other vendors of Avanti parts put together.  This is how I became the world’s largest supplier of N.O.S Avanti Parts.

Here are some facts you may or may not know about Nostalgic Motor cars, Dan and Betty (AvantiLady on E-bay) Booth.  We have never advertised very much, as I have always had more Avanti Service and restoration work than I can possibly do and still turn down work on a daily basis. I purchased my first Avanti and started servicing them over 55 years ago.  I was a journeyman toolmaker at General Motors, Pontiac Motors Division in Pontiac, Michigan.  I quit this 7 day a week, good paying, full time job in pursuit of the Avanti.  For over 45 years my full time job has been owning and operation Nostalgic Motor cars , A full service Avanti dealership.   Sometime in the late 1960’s we, Nostalgic Motor cars, were listed in an Avanti book that was put in the glove box for customers reference of their authorized service centers.

45 years later, our exclusivity has not changed  We’ve never serviced or sold parts for other Studebaker cars or trucks, just Avantis, and just 1963-1985  I started stocking more and more Avanti parts so customers would not have to wait for me to order their parts.  Avanti Motors was sending us more and more service work.  By 1975 Avanti Motors was so pleased with our service, of new and used cars, that in late 1977 or early 1978 Arie Altman called me and stated “ Dan as you are aware we have free Avanti loaners for service.  One stays in the Detroit Area, One stays in the New York area. and the third one is for the Chicago area.  We are going to eliminate this program.  We are going to send you a lot more service work.  Not all at once, but gradually.  We want to get out of the service business entirely.”  I again increased the size of my parts department to handle the increase in service work.

Since about 1976, Avanti Motors knew I wanted to be a new car Avanti dealership.  I was already buying and selling them used.  They stated that I had to prove myself as a used Avanti dealership and factory authorized service center, before I could become a new Avanti dealership, but I could become an associate dealer.  I was never an Avanti Associate Dealer, anybody could be an associate dealer, all you had to do is ask and refer somebody to Avanti Motors.  If that person or company purchased an Avanti from them, you could earn up to 10% of the sale.  In the early years of Avanti Motor sales literature, they put in print explaining how easy it was to become an Avanti Associate Dealer, nowadays it seems like everybody claims to have been an Avanti dealer.  Finally in 1981 I signed an Avanti Motors Franchise Agreement, which was/is required by the State of Michigan to have a class “A” new car dealership license.  At that time I only had a 3 car show room and 3 service stalls.  We always had 1-3 New Avantis, in stock and 5-15 Used Avantis and probably 10-30 Avantis waiting for service, at all times.

We were Avanti Motors only true full service franchised Avanti Dealership.  We became their largest service center for new car warranty work.  We also were the leader in new and used Avanti sales.  January of 1983 Steve Blake fired his sales manager, Chuck Soliday.  Around March of 1983 I hired Chuck Soliday to do the same things that I was doing.  Sell new and used Avantis and to help me service Avantis.  He was very knowledgeable of the Avantis.

He was hired by Nate Altman, in the very early 1970’s to sell Avanti at the factory, and also set up and sold Avantis at the auto shows.  He also worked and repaired the used trade-in Avanti at this home after hours.  This was a gentlemanly that had probably sold 95% of Avantis new or used that left the factory after Nates death   As a dealer when I ordered a new Avanti, I ordered from him 99% of the time.  He learned a lot of tricks from me on the easy and fast way to pull service on the Avanti and how I could service them much faster than the factory could, which saved Avanti Motors money !  All this hands on experience and knowledge comes free with the purchase of parts, from Nostalgic Motor cars.  I will not, and have not sold reproduction Avanti parts, using the original Studebaker Avanti part numbers, like the others do.  I personally think that it’s misleading, deceiving and wrong, to not state they are a reproduction part.  Over 30 years ago, on November 9th, 1989, Nostalgic Motor Cars purchased the Avanti Motors parts division including all existing Inventory, all original blue prints, tooling, part numbers, purchase records and etc. with the exclusive rights to produce those parts.

​     Until November 9, 1989, we were second only to Avanti Motors on our parts inventory of N.O.S. Avanti parts.  After November 9, 1989 we became the World’s largest supplier of Avanti parts for 1963-1985 Models. We do not have a catalog.  I prefer a simple phone call @ 248-349-4884 and I will tell you if we have that part and the price.  You will also find out when you ask about a particular Avanti part that you may not need that part, but another part, or just an adjustment to that part.